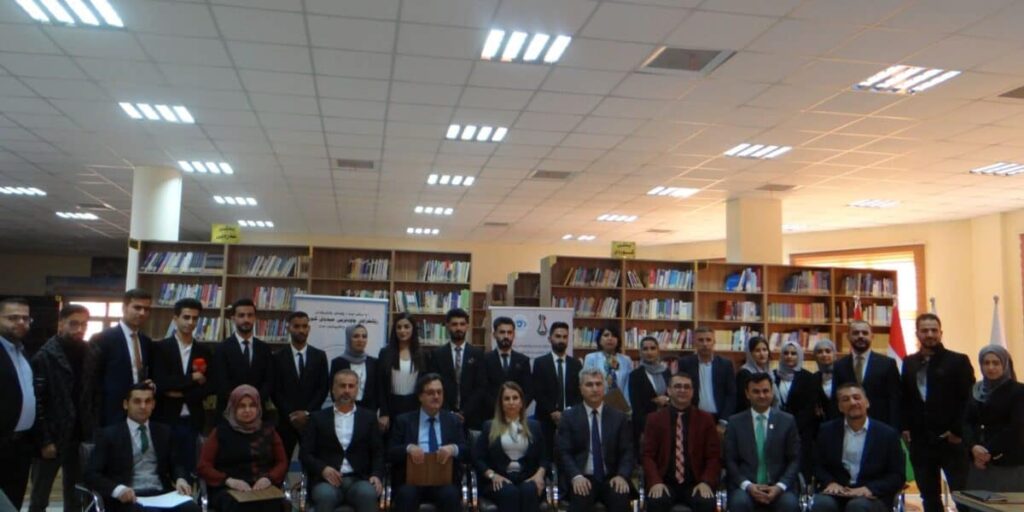 Dr. Mahabad Kamil Abdullah, UoH president with Dr.Edris Karim Mohammed vice-president for Administration and Scientific Affairs, Dr. Nariman Abdulla Dean of the College of Humanities, with a numbers of officials lecturers and students Department of Media of College of Humanities of UoH together with Kurdish Media Watchdog Organization( CHMK) held a symposium under the title of “ Symposium on Study and Media Education or Media curriculum’’ at the central library of UoH, On November 17th, 2021.
The Symposium started with standing one moment silently to soul of martyrs, and later UoH president gave a speech and warmly welcomed the guests and participants, and discussed about the concept of media Studies, and mentioned that it is a recently modern approach for us, however, for the first time, It was introduced as a program of study (curriculum) of the kindergarten stage till secondary school in Australia. She further added all the means namely audio-visual Media are one of the main channels and mediums of this era through which trying to convince the individuals in all the aspects. Certainly, Media should be parallel with life and be convenience to the new generation.
Then, Dr.Nriman Abdullah, read a joint speech message of both UoH and Kurdish Media Watchdog Organization.
After That, Three Panel had been presented:
First Panel: entitled ‘’The study of Media in Academic Centers of Kurdistan Region” by three Panelist and head of the panel was Assistant Lecturer Mr. Faruq Jamil.
Prof. Dr. Hakim Osman, presented a seminar entitled ‘’Chances and the barriers which faces Media Studies.’’
Prof. Dr. Bahat Hasib Qaradaxy, offered a presentation on “University and Media Studies/Curriculum at the Twenty First Century.’’
Dr. Hataw Hama Salih, entitled “The Characteristics of Media studies and Bologna Process at/in the Study of Media ‘’
With an answer- question session, the first panel was ended.
The second panel was presented by three panelists and the head was Assistant Lecturer Ms. Basoz Tofiq entitled ‘’Media Education and Curriculum in the study of Higher Education and Scientific Research’’
Prof.Dr.Karwan Ali, with “Post Graduate Study of Media and the available Opportunities of Pedagogy.’’
Assistant Prof.Dr. Sherko Jabar, entitled ‘’the States of Academic Suitability of the types of Media at Universities and Institutions.’’
Dr.Shwan Adam Aivas, entitled, ‘’The challenges of conducting researches and Media Education in Higher Education.”
With an answer- question session, the first panel was concluded.

Third Panel, entitled, ’’ Study and Media Education and thier influence on Labor Market’’ for two Panelists and the head was Assistant Lecturer Mr. Muhamad Star.
Dr.Muhamad Omar,entitled, ‘’How to Prepare Ourself for Labor- Market.’’
Dr.Brham Xalid, entitled, ‘’The Graduates of Scientific Departments in the Media Labor-Market.”
With an answer- question session, the Third panel was concluded.
At the End, the recommendations of the symposium were read by assistant Lecturer Mr. Faruq Jamil, that the crucial one is working on holding a conference on regional level. later, certificate of attendance was awarded to the participants.