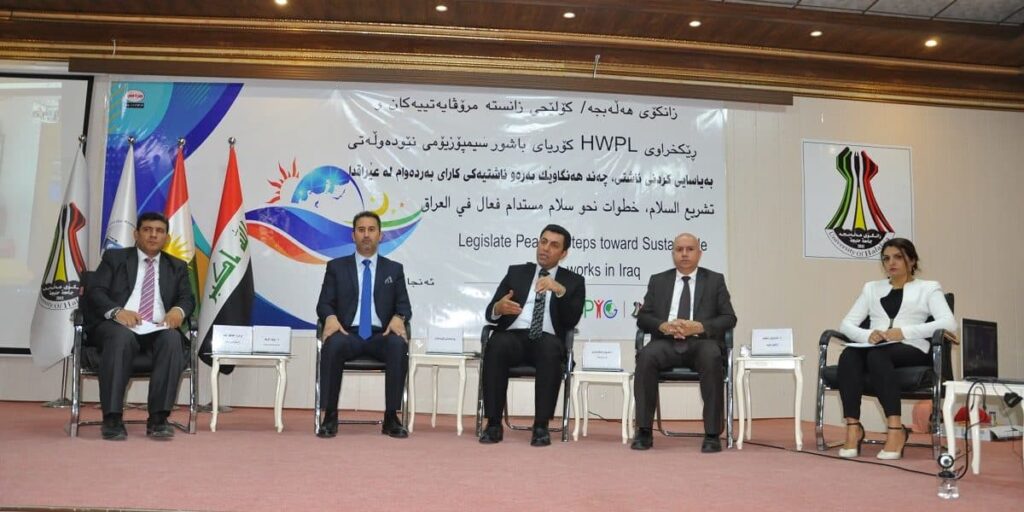 College of Human Sciences of UoH together with WHLP South Korean Organization held an International symposium entitled, “Legislating Peace, Steps towards Sustainable Peace Works in Iraq” in which Asst.

Prof. Dr. Mahabad Kamil Abduallah, UoH president , the vice presidents, deans of college of Science and Humanities ,numerous lecturers, all governmental and administrative Units of Halabja Governorate, representatives of all different religions including Islam, Kakai, Yazdis and Buddhism, representative of American Organization of CTP ,representative of South Korean Organization of WHLP attended the symposium at Mustafa Zalmy Hall on the 16th of October 2019.

At the beginning, the attendances stood one minute silently for the soul of Martyrs.Then, the welcome speech was offered by Dr. Nariman Abduallah Ali, dean of College of Humanities in which he welcomed the attendances warmly.Later, Dr. Mahabad Kamil Abduallah made a speech in which she expressed her sadness as news of war, killing and invading are splashed in the headlines across all the newspapers.

She also stated, “Our enemies always are choosing the options of war which we always stand against it”.“Our aim is to maintain and be at peace and also provide stability and balance in the world and the region” she further added. In addition, she stated, “we can’t judge people based on their religion, nation…etc. and we strongly are against this because we all share the same characteristics of humanity”

Later, Mr. aram Ali Majeed, the representative of WHPL organization, read the organization article and discussed the works and activities which were conducted together with UoH and Kurdistan Universities.

He stated that there have been efforts to offer these programs within education and teaching process for the purpose of standing new generation against war.A panel on “Peace Education” was run by Asst. Prof. Dr. Hashim Omer Ali, Uoh lecturer, with the participation of Dr. Rebwar Karim, representative of Iraqi Parliament ,Dr.Luqman Wardi ,representative of Kurdistan Parliament, the lecturer Mr. Mariwan Naqshbandi ,representative of Ministry of Endowments and Religion Affairs and the lecturer Ms. Arazoo Rashid, Head of English department at Koya University.

At the end, the UoH logo was presented to the manager of the panel and the members